When Caitlyn first came to Charleston Animal Society in May of 2015, her body was broken, but her spirit shined through her eyes – those brown saucer-like eyes — that could penetrate your soul with just one glance.

Waters said it took about 13 months to compile all of the information for Caitlyn’s story, because there were so many articles from around the world. “It has been amazing to see how her story relates across all countries, ethnicities and ages,” Waters said. “Everyone is fascinated by her story that shows how people come together when they get upset by abuse like what she suffered.”

While Caitlyn’s story is still being written, this book captures the most difficult part of her life — her journey from abuse to recovery. Found with her muzzle taped shut with electrical tape, Caitlyn nearly died. But thanks to a community who cared, Charleston Animal Society, local veterinarians, detectives and prosecutors — Caitlyn’s story became an inspiring story of triumph over adversity. This beautiful animal put a face on animal cruelty and in the process, she inspired people around the world.

When the tape that had been maliciously wound around her muzzle was removed, Caitlyn’s face blew up from swelling. Doctors worried that her tongue may have to be removed because of the lack of oxygen she had suffered. But through it all she would look at you with those eyes and comfort you more than you could comfort her – everything will be OK – she seemed to say.

When Charleston Animal Society initially made the decision to share her story, we did so in the hopes of raising awareness of the animal cruelty that still impacts our society. Somehow and for some important reason, Caitlyn’s story connected with people around South Carolina, around the country and around the world. She became a social media phenomenon, she appeared on CNN, Fox News and the hashtag #IamCaitlyn went viral.

She became the voice for so many animals who do not have a voice. Animals that are abused, neglected and abandoned every single day. Her message was simple: This. Must. Stop. Her story made the issue of animal cruelty impossible to ignore. Charleston Animal Society could point to this case and encourage lawmakers, prosecutors, police and our friends and neighbors to demand that cruelty laws in South Carolina be enforced for all animals.

Even humans found solace in Caitlyn’s bravery. Hyman received letters from women who suffered from domestic abuse. One wrote that she found the courage to leave her abusive situation after being inspired by Caitlyn. “The look in Caitlyn ‘s eyes evoked emotion Her story of hope and recovery has been instrumental in helping others to liberate themselves and animals from abusive situations,” said Hyman.

The man who did this to Caitlyn was eventually convicted and was given the maximum sentence for animal cruelty. And much of the reason is because Caitlyn could not, and would not be ignored. Her life mattered. The lives of every animal who falls victim to abuse matter.

When you purchase this book, you are helping future Caitlyns get the help they need through the Caitlyn Anti-Cruelty fund at Charleston Animal Society. We hope you enjoy this book and share it with your friends and family as a lesson to all of us about the power of good over evil. It is available now at www.CharlestonAnimalSociety.org/shop. 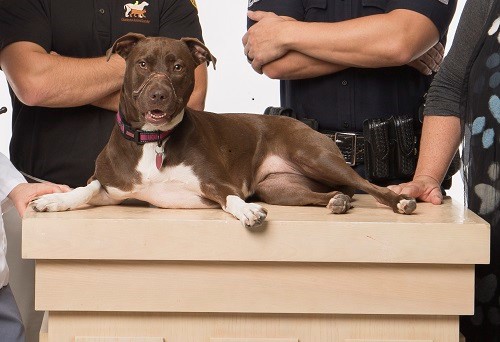 By Dan Krosse Photography: Jonathan Boncek On August 8, 2016 the defendant accused of nearly killing Caitlyn by taping her muzzle shut […]