It’s always a great morning at ABC News 4 when station employees see Kay Hyman strolling in with an adorable dog or cat. She is a weekly guest on Good Morning, Charleston and Lowcountry Live! and Jason Lewis, Creative Services Director, has come to genuinely love his station’s partnership with the shelter.

“Kay’s great about bringing the pets and getting the word out to the public what they’re in need of and what events they have coming up to support the shelter,” Lewis said of Hyman, Charleston Animal Society’s Director of Community Engagement. Hyman visits Good Morning, Charleston each week, airing from 5am-7am, followed by Lowcountry Live! from 10am-11am.

Between Hyman’s personality, ability to connect with an audience and how recognizable she truly is, Lewis couldn’t imagine anyone better to get the shelter’s message across to ABC’s audiences. “Kay is terrific, she’s personable and knows how to talk to the viewing public. Her personality really comes across on screen so it’s great that she has that recognizable personality and can really bring good content to our shows,” he says. “Everyone immediately recognizes her in the studio and in the station. When she comes in she brings the animals, and people love all the cute little dogs and cats that she has with her, just walking around.”

Whether Hyman is visiting to help get an animal adopted, such as Gummy Bear the toothless dog who recently graced the studio, or to promote events, Lewis values ABC’s role as a platform to promote the shelter’s message. “Animals need good homes and we happen to have a platform to be able to reach out into the community and showcase these animals and find them homes,” he says. “It’s important people see the need is constant. So whether Charleston Animal Society needs donations or to move animals, we really use our television as a platform to get this message out to the community.”

Hyman’s visits also help to lighten the mood at the station, which understandably can get heavy at times. “When Kay comes on Lowcountry Live! and is able to bring on the animals, it’s fun. It’s just lighthearted stuff, followed by a great message behind it as well that these animals need good homes,” Lewis says. Whenever ABC features a pet on the morning shows, he notes the phones ring off the hook with viewers asking for more information on who they can call and how they can adopt the pets. Though ABC doesn’t have a number of how many animals they have helped find homes, they are proud to have played a part for so many. “It definitely tugs on the heart strings. It’s so great to see these animals that need homes get placed into ones that will hopefully be their forever home.”

Other ways in which ABC promotes Charleston Animal Society is to showcase specific shelter events. They even give away tickets, which is just another reason viewers should tune in and watch Hyman’s appearances. That or perhaps seeing the models of the Firefighter Calendar visit the show! “We’re a sponsor of the Firefighter Calendar this year so to be able to put a little extra promotion behind that and give Charleston Animal Society extra appearances with something a little different was great,” Lewis said of having a firefighter on each week along with a shelter animal. “It helps mix up the exposure a little bit and try to push sales to raise donations for Toby’s Fund. We have a great audience for that kind of thing—people who are home during the day or off and want to reach out and adopt and make a donation.”

Lewis has also loved following along with Caitlyn’s story and being able to share it with viewers every step of the way. “To be able to bring Caitlyn’s story to the public was inspiring for a lot of people, especially to just see her come back after she made her recovery,” he notes.

There are few who don’t light up at the sight of Kay Hyman when she comes around the station with a furry little friend in need. But one thing’s for sure, Charleston Animal Society always has a place on their television sets and in the homes of all their viewers. 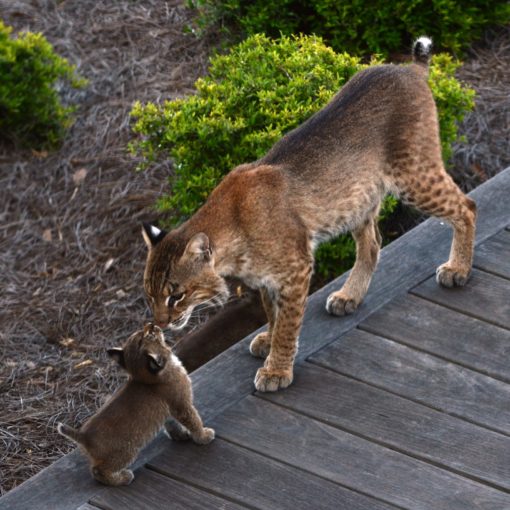